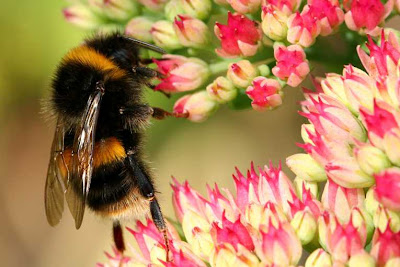 A report, Global Honey Bee Colony Disorders and other Threats to Insect Pollinators, was published today by the UN Environment Programme (UNEP) and analyses the latest research into declining bee populations.
Threats include increasing use of pesticides, air pollution, parasites and declines in flowering plants. The use of chemical insecticides is increasing and the different insecticides are acting as a ‘lethal cocktail’, deadly to bee species.
In addition, an estimated 20,000 flowering plant species, upon which many bee species depend for food, could be lost over the next few decades. Climate change is adding to the bees’ problems by changing the flowering times of plants and affecting rainfall patterns.
Scientists are warning that we need to rethink the way in which humans manage the planet if we are to feed a growing world population. Bees and other pollinators are hugely important in global food production and integral to healthy ecosystems.
Without pollination, many flowering crops would yield little or no fruit. Achim Steiner, UNEP Executive Director, said: ”The fact is that of the 100 crop species that provide 90 per cent of the world’s food, over 70 are pollinated by bees”.
The UNEP report shows that boosting bee populations could improve food security and ensure that both important crops and threatened wild plants are protected. The authors of the report make several suggestions.
Firstly, an incentive scheme for landowners to restore pollinator-friendly habitats, including key flowering plants next to crop-producing fields. This would benefit both farmers and bee populations.

Products associated with bee deaths lethal to birds, other wildlife

Jason Plautz
E&E reporter
A widely used class of pesticides linked to widespread bee deaths also poses a health threat to birds, aquatic creatures and other wildlife, according to a report out March 19.
Public health advocates and environmentalists have long targeted neonicotinoids, saying they are at least partially responsible for the deaths of roughly one-third of the country’s bees each year since 2006. But the new report, commissioned by the American Bird Conservancy (ABC), says the insecticides are also lethal to birds and could affect entire ecosystems, including aquatic systems.
In light of the findings, the ABC is calling on U.S. EPA to ban the use of neonicotinoids in seed treatments and suspend their application until an independent review can be completed.
“It is clear that these chemicals have the potential to affect entire food chains,” said report co-author Cynthia Palmer, pesticides program manager for ABC. “The environmental persistence of the neonicotinoids, their propensity for runoff and for groundwater infiltration, and their cumulative and largely irreversible mode of action in invertebrates raise significant environmental concerns.”
A previous request to ban clothianidin, a neonicotinoid pesticide, was rejected by EPA in July (Greenwire, July 25, 2012). And earlier this month, a vote to ban the pesticides by the European Union failed.
The report, written by environmental toxicologist Pierre Mineau, reviewed more than 200 existing studies, including industry research. The evidence, Mineau said, showed that neonicotinoids can prove more toxic to birds in lower doses than the pesticides they were designed to replace.
A single corn kernel coated with one of the pesticides would be enough to kill a songbird, the report warned, and smaller doses were associated with reproductive and neurological problems.
EPA, said Mineau, has underestimated the toxicity of the chemicals in birds by a factor of anywhere from 1.5 to 10 times depending on the specific insecticide and bird species. The agency also ought to do more to pressure registrants to help diagnose affected populations, he said.
“It is astonishing that EPA would allow a pesticide to be used in hundreds of products without ever requiring the registrant to develop the tools needed to diagnose poisoned wildlife,” Mineau said.
The report also found contamination levels in surface- and ground-level water systems that were already above the threshold associated with death in aquatic invertebrates. Levels were high enough in areas like  and the Canadian prairies to suggest there could be an impact on the entire aquatic food chain, eventually reaching populations like birds and amphibians.
That, said Mineau, should add more backing to the push to take neonicotinoids out of use, at least until more research is done.
“We’re not saying these impacts are more important than bees, but this is an added piece of the puzzle,” Mineau said at a news conference today.
In a statement, CropLife , an agribusiness group, said that while “it is critical to protect bird population levels and support biodiversity,” the link between insecticides and any decline in bird populations is “unfounded.”
“CLA is disappointed that the report, which has not been published in a peer-reviewed journal, paints a flawed picture of the Environmental Protection Agency’s risk assessment of crop protection products, industry stewardship and agriculture as a whole,” said Mike Leggett, senior director of environmental policy for CropLife America.
“Our industry continues to conduct studies directed at ensuring that the crop protection products available to farmers can be used safely and will effectively help growers provide nutritious food for communities around the world,” Leggett said.
Neonicotinoids were developed in the 1990s to replace harmful organophosphate pesticides and are now widely used on crops including corn and soy and in some home-gardening products.
Public health advocates say there’s now evidence that the pesticides were rushed to market without proper assessment and are calling for them to be restricted. The bee die-offs have captured headlines, since up to one-third of the  diet depends on insect pollinators.
The Department of Agriculture has conducted several studies on the bee deaths and has said there is no single cause, including pesticides (Greenwire, April 24, 2012). EPA has said it will complete a review the safety of neonicotinoids for honeybees in 2018.
But speaking this morning, Peter Jenkins of the Center for Food Safety said that was “clearly not enough” and called on Congress to “hold EPA’s feet to the fire” by threatening to suspend the use of the product or amend the farm bill to restrict its use. Jenkins also said that EPA should also be pressured to speed up its safety reviews and that its review process for chemicals should be reformed.
To read the report, go to:http://www.abcbirds.org/abcprograms/policy/toxins/Neonic_FINAL.pdf

Public auction of outdoor gear to raise money for youth programs
Looking for some good deals on hunting, fishing and other outdoor equipment? If so, plan on attending the Outdoor Writers of Kansas (OWK) auction on May 6 at 7 p.m. at the Hilton Garden Inn,
,

Commission votes on elk and antelope seasons
The Kansas Wildlife, Parks and Tourism Commission conducted a Public Hearing at the   in  on April 25. Commissioners listened to lively discussion during the afternoon Workshop Session concerning a recommendation by the Kansas Department of Wildlife, Parks and Tourism to prohibit the use of vehicles and radios for coyote hunting during the regular firearm deer season (Dec. 4-15 for 2013). The recommendation was intended to aide law enforcement officers curb illegal deer hunting. Coyote hunters attended the afternoon session to express their concerns about losing hunting opportunities. The recommendation will be discussed again at the commission’s June 27 meeting in Garden City.
During the Public Hearing, commissioners approved establishing short-term RV parking for a fee of $50 per month at Scott, Meade, Glen Elder, Kanopolis and Webster state parks.
Recommendations for standard season dates for 2013 elk and antelope seasons were approved.
For a complete listing of all 2013 hunting season dates, visit www.ksoutdoors.com and click “Hunting / When to Hunt.”