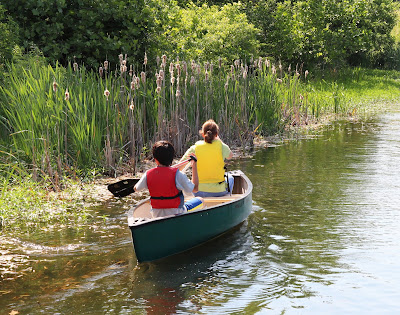 The Kansas Wildlife Federation’s Day Camp on June 12th at TimberRidge Adventure Center in Olathe, Kansas, was great fun for the 10-12 year old kids who attended. The kids enjoyed boating and fishing in the morning before it became hot. Everyone caught at least one sunfish, bass or catfish in the catch & release program on Catfish Lake. They also enjoyed the canoes & paddle boats. After lunch in the Welcome Center, there was target shooting on the archery range followed by the BB gun range where water filled balloons were targets. Each of the kids received a one third gallon water jug donated by the Coleman Company and a canteen with carabiner clip donated by Bass Pro Shop. Bass Pro also donated two fishing poles that were given away in a drawing. Quail & Upland Wildlife Federation also helped sponsor the Day Camp by providing liability insurance. Ted Beringer and Cynthia Rhodes were the two Kansas Wildlife Federation board members that helped run the camp but the staff at TimberRidge deserve special thanks, especially Starla & Lysa for running each of the Day Camp events with the kids’ safety in mind. If you wish to be notified about next year’s Day Camp, check the Kansas Wildlife Federation’s website <http://www.kswildlife.org> in April (2014) for the announcement.

Streams Surveys being Conducted Through August

Stream Survey and Assessment Program provides vital information about native aquatic species
Crew members from the Kansas Department of Wildlife, Parks and Tourism (KDWPT) Stream Survey and Assessment Program are traveling across the state this summer to collect information regarding the health of ’ flowing waters. From May through August, a team of biologists, stream ecologists and numerous volunteers will visit 45 sites in nearly 20 different counties to study a vast array of aquatic life. Primary survey sites this summer include the Saline and.
Since 1994, KDWPT has been surveying and assessing streams to establish and maintain an inventory of the fish, mussels and other aquatic invertebrates found in ’ 12 river basins. The results and samples from each site are used to help manage native aquatic communities, including threatened and endangered species and species in need of conservation.
“Native species are good indicators of the overall health and vitality of our land,” said ecologist and program coordinator Mark VanScoyoc. “The fish we catch for recreational purposes out of our reservoirs, lakes, and ponds can be raised in a hatchery and released, but this is not the case for many native stream species at this time. It’s only prudent to realize that what is good for our aquatic species is going to be good for us as well.”
For more information on this program, visit www.ksoutdoors.com and click “Services/Stream Assessment and Monitoring Program.”