Bleeding Kansas by Elby Adamson
The phrase bleeding Kansas usually refers to the violent period in the 1850s prior to the Civil War when Kansas was already a battleground between proslavery and free state forces. But those who love the outdoors can easily find a metaphor for bleeding Kansas as the fall foliage offers a definite sanguine appearance. 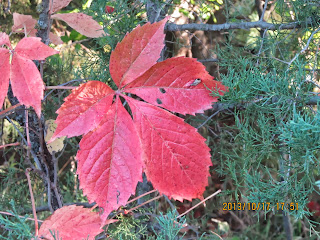 Photo by Elby Adamson
Swaths of crimson paint the flanks of the Flint Hills where smooth sumac (Rhus glabra) displays the color of blood in the autumn sun. 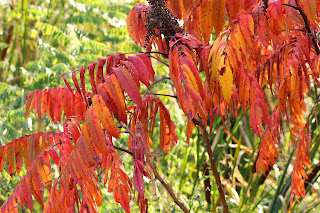 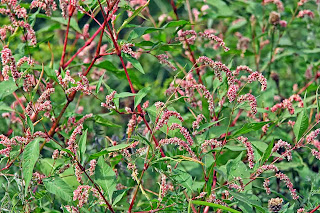 Smartweed Photo by Hans Toom
and pokeweed (Phytolacca americana)offer fall colors with their scarlet stems and in the case of the pokeweed its purple-red berries as well.
The gooseberry (Ribes spp. Saxifragaceae) has leaves that stand out as bright red patches in riparian areas and the coral berry (Symphoricarpos orbiculatus) adds tiny bits of purple and red as its berries dot the fall landscape. 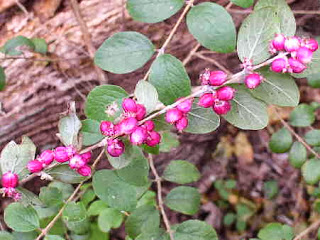 Coralberry Photo by Tony Presley
Many other plants ranging from rough-leaved dogwood to both big and little bluestem grasses offer tints and hints of purples and reds as well.
Late in the fall wahoo brings a bright red in both foliage and bright three-part berries described as fuchsia colored. But sometimes this plant is startling red to those who find it along rocky outcroppings and as an understory shrub or small tree. The color is another welcome relief as fall moves toward the drab grey of November. 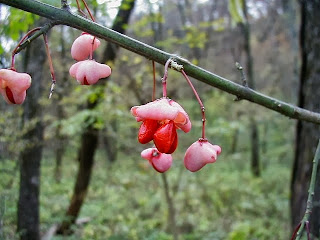 While the original term bleeding Kansas evokes memories of violence and tragedy, the fall colors of many Kansas plants and trees simply remind us of the beauty of our states’ natural wonders.