Honeybee  (Apis mellifera) carrying nectar to the hive with pollen attached. Photo  Credit: Muhammad_Mahdi_Karim http://www.flickr.com/photos/[email protected]/
The  western honeybee was introduced to North America from Europe although it  originated in eastern Africa. There are only seven species of true honeybees  from among the 20,000 known species of bees. Their agricultural importance as a  pollinator of fruits & vegetables ($10 billion dollars annually) is  difficult to overestimate even aside from their production of a quarter of a  billion dollars worth of honey annually. Therefore their dramatic population  decline over recent years is alarming. The causes of this decline have been  traced to several factors including: destruction of wild bee habitat by  agricultural development, the use of certain neuro-active insecticides like the  neonicotinoids, and infection by several types of mites.
Additional  Resources:
Detailed  Information: http://en.wikipedia.org/wiki/Honey_bee
Two  Scientific American Blogs:
Close-Ups  of Bees Midflight.  andHoneybees  and Monoculture: Nothing to Dance About. Catclaw sensitive briar is a sprawling briar throughout Kansas that grows in open woodlands, prairies and especially in dry sandy soils.  Catclaw can reach 6 feet in length. Its dramatic inflorescence is pink to lavender with numerous radiating stamens. Its leaflets are sensitive to tactile stimuli that causes them to fold together. Catclaw is very nutritious for livestock but when land is overgrazed, the incidence of Catclaw declines. Turkey Vultures are scavengers that feed almost exclusively on carrion. Their outstanding sense of smell allows them to detect gases generated by decay processes in dead animals. Since many pathogens such as anthrax and hog cholera cannot survive passage through their digestive tracts, Turkey vultures limit the spread of carrion-borne diseases. In parts of the world where vultures are declining in number, rats and feral dogs are increasing.

Their “V”-shaped wing configuration makes Turkey vultures easy to spot as they easily soar on thermal air currents, needing to flap their wings only occasionally. The plumage of males and females are nearly identical. Body feathers are dark brown to black. In flight, white to grey feathers on the underside of their wings become apparent. Their heads are red and nearly free of feathers. They have a short curved, ivory colored beak. Turkey vultures are found in many parts of Kansas and are protected by the Migratory Bird Treaty Act of 1918. In late Fall monarchs east of the Rockies migrate to the southern part of the United States including California. Monarchs are known for their annual migrations that require more than four generations to complete when returning north. Flight itineraries seem to be inherited using the position of the sun, a circadian clock housed in their antennae and the earth’s magnetic field for orientation. Their reproductive cycle begins when females deposit eggs upon leaves of milkweed plants. The resulting caterpillar larvae feed on the milkweed providing energy to become pupae. During the pupa or chrysalis stage, the caterpillar constructs an exoskeleton within which it metamorphoses into a butterfly. Once its wings are inflated with an orange fluid, the butterfly can fly. Larvae eat only milkweed, but adult Monarchs sip nectar from other plants also, including goldenrod, lilac, red clover, ironweed, thistles, and asters. Chip Taylor, (Director of Monarch Watch http://monarchwatch.org/blog/ in Lawrence, Kansas) confirms that Monarch populations are dwindling due to recent droughts and progressive loss of millions of acres of habitat. Much of its habitat loss is due to herbicide use by farmers on their herbicide-resistant soybean and corn plants. This practice has eliminated milkweed plants that would otherwise grow between row crops. In addition, prairie and pasture habitat are being plowed under for agricultural expansion.

By Desiree Sorenson-Groves
National Wildlife Refuge Association
New Report Confirms What the Government Shutdown and Data Shows:
Conservation is Smart Use of Taxpayer Dollars
The National Wildlife Refuge Association (NWRA) commends a new report released today by the U.S. Fish and Wildlife Service (FWS) which shows that national wildlife refuges are a good investment for American taxpayers and boost to local economies. The Banking On Nature study shows that for every $1 Congress provides in funding to run the National Wildlife Refuge System on average $4.87 is returned to local communities.
“Conservation conserves more than wildlife, it is conserving our tax dollars; an important value for Americans of all political stripes” said David Houghton, President of the NWRA. “There is nothing more conservative than conservation or more progressive than preserving our natural world for future generations.”
The report, the fifth of its kind released by FWS with the last report released in 2007, shows a remarkable trend of increased visitation to refuges and increased economic contribution to local communities – all during the height of the greatest economic recession since the Great Depression.  From 2006 to 2011, refuge visitation increased by 30 percent increase and overall economic output from refuges increased by 20 percent, resulting in an annual $2.4 billion returned to local economies.
“National wildlife refuges are essential to the American economy; they create jobs, support communities and generate tax revenue,” said Houghton.  “This was noticeable during the government shutdown, as local businesses that depend on their refuge, suffered huge losses. Refuges are economic engines, providing substantial bang for our buck, something that as we emerge from the Great Recession, is more important than ever.”
FWS anticipates the upward trend in Refuge visits and local economic stimulus will continue. However, NWRA and over 230 volunteer, local refuge “Friends” groups are concerned that with recent dramatic budget cuts and more on the horizon, this trend is at risk as refuges are closed to visitors because of lack of staff and resources.
“The Refuge System is facing the loss of more than 450 staff positions by the end of next year should Congress continue slashing their budget,” said Houghton.  “Refuges will be forced to eliminate popular hunting and wildlife watching programs, end volunteer efforts due to lack of staff to provide oversight and many will close their doors entirely. These short sighted budget cuts will ultimately hurt not only wildlife, but local economies that depend on these unique federal lands.”
Highlights from Banking On Nature Report
The National Wildlife Refuge System:
● Generates $2.4 billion in sales and economic output, a 20% increase (from 2006);
● Welcomes 46.5 million visitors annually, a 30% increase (from 2006);
● Returns on average $4.87 to a local economy for every $1.00 Congress provides in funding, a 22% increase (from 2006);
● Creates 35,000 jobs annually, a 23% increase (from 2006);
● Produces $792.7 million in job income for local communities;
● Generates $342.9 million in local, county, state and federal tax revenue;
● Brings tourists from around the nation and world – 77 percent of refuge spending was done by visitors from outside the local area;
● Provides a combined economic benefit to communities nationwide that is almost five times the amount appropriated to run the System.

, for the purpose of hearing and discussing grant applications previously submitted for funding under the Recreational Trails Fund Act. The meeting will begin at 1:00 p.m. in the Auditorium. Signs on the premises will provide directions to the meeting room.

Persons interested in commenting on applications should attend this meeting. Grant applicants are encouraged to attend and discuss their proposals. Time for comments will be limited. Final decisions about proposals will not be made at this meeting. The Board will evaluate and make recommendations after reviewing all applications.
For more information, contact Kathy Pritchett, Trail Grant Coordinator, Kansas Department of Wildlife, Parks and Tourism,
512 SE 25th Avenue, Pratt, Kansas  67124

By Roxana Hegeman
Associated Press
A federal judge has sent two  brothers to prison for what prosecutors say may have been the largest deer poaching operation in  history.
James Bobby Butler Jr., the owner and operator of Camp Lone Star near Coldwater was sentenced Monday to 10 months and has already paid a $25,000 fine. His brother, Marlin Jackson Butler, who worked as a guide, received an eight-month prison sentence with no fine. They must also serve three years of supervised release after they get out of prison.
“While certainly not the most serious violations I have seen, they are serious,” U.S. District Judge Monti Belot told the men. “This was a business proposition, and it was a profitable operation.”
Belot also prohibited James Butler, who owns a hunting operation in , from guiding hunters for one year of his probationary period. As convicted felons, neither man can possess a firearm.
Prosecutors said the  sold guided deer hunts in  for hunters from  and , charging them about $3,500 for archery hunts and $5,000 for rifle hunts. Their clients were encouraged to kill deer illegally, sometimes without a license or in excess of the bag limit. Some deer were spotlighted at night, others shot with a gun during archery season.
“You knew this was a crime, you knew this was wrong,” Belot said.
The brothers, from , admitted in 2011 to violating the Lacey Act, a federal law that prohibits the interstate transport of any wildlife taken in violation of state regulations. The brothers, both from Martinsville, Texas, pleaded guilty to one felony count of conspiracy to violate the Lacey Act and one felony count of violation of the Lacey Act.
James Butler also pleaded guilty to obstruction of justice for ordering an employee at the High Roller Whitetails, a deer operation in Center, Texas, to get rid of several white-tailed deer mounts after wildlife officers began conducting interviews in Texas regarding the federal investigation. The employee refused to destroy the mounts.
James Butler told the court that since the investigation started, he has had plenty of time to think about all the hurt he has caused his family and friends: “I cannot begin to describe the regret that I have felt,” he said.
Marlin  declined to make a courtroom statement.
The 10th Circuit Court of Appeals, in its decision last year, said the district court made a mistake in 2011 in calculating sentences based on the full price of a guided hunt, rather than the actual retail value of the animals.
But Belot said he was not satisfied with the reliability of the evidence prosecutors presented about the value of the deer at Monday’s re-sentencing hearing. The judge therefore determined the value of the illegally taken deer at zero, which then factored into a lower federal guideline sentence.
The prison sentences handed down are far below the initial sentences the men were given in 2011 by the late U.S. District Judge Wesley Brown that the appeals court threw out when it sent the case back for re-sentencing. Brown had initially given James Butler a 41-month sentence and Marlin Butler a 27-month sentence. 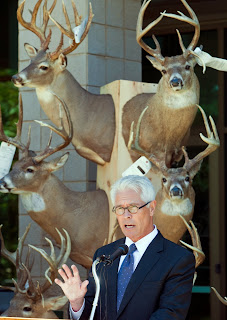