The Western meadowlark is the state bird of Kansas. It has a yellow chest with a black “V” below its throat. Meadowlarks are ground nesting birds. They create nests covered with a roof of grass and bark that is woven into the surrounding vegetation. The nest may be connected to a grass tunnel several feet long. Consequently, untimely mowing, hay cutting or burning may destroy eggs and young. Meadowlarks are most abundant in native grasslands. They forage on the ground on low to semi-low vegetation eating mainly insects, beetles, caterpillars, grasshoppers and snails plus seeds & berries in winter. They will also consume waste grain on cultivated land. However, habitat has been lost to intense agricultural development. It is still abundant but slowly declining throughout much of its range.  A short video captures its song

For a kinetic map of the distribution of Western Meadowlarks during the year visit: Bobcats are the only native member of the cat family remaining in Kansas. In eastern Kansas, bobcats can be observed along the immediate perimeter of forests or well-developed shrubby areas that can provide cover when threatened. Their stealthy behavior and reddish fur with black spots make effective camouflage. In central and western Kansas, bobcats are found on rocky hillsides as well as shrubby streamside habitats and ravines. Typically, cottontail rabbits and jackrabbits comprise half their diet. Depending upon geological topography, habitat and available prey, the bobcat’s range can extend from 1.5 to 60 square miles. Dens can include unimproved rock crevices and fallen hollow logs. The lesser prairie chicken (Tympanuchus pallidicinctus) is a ground nesting bird that lives in open prairies, especially where shinnery oak or sand sagebrush grow. About half of the known lesser prairie chicken population of the southern plains lives in western Kansas. Although this iconic prairie species is native and had previously been common in portions of five states (Colorado, New Mexico, Texas, Oklahoma & Kansas), its population has been steadily declining since the 1800s.

This decline has become more dramatic recently due to a combination of drought, habitat loss caused by human activities, and now the threat of mindless legislation. The U.S. Fish & Wildlife Service recently assigned the lesser prairie-chicken to the “Threatened” category in an attempt to reverse this decline and prevent extinction. It also entered into a partnership with the five states to limit adverse regulatory impacts on landowners and businesses.

The male shown here has yellow-orange neck sacs that inflate with air typical of courtship behavior and a bright yellow eye-comb above the eye. The back of the bullfrog is olive-green, sometimes with grayish-brown mottling. Its green upper lip is distinctive from its pale lower lip.

The eyes have brown irises and horizontal elliptical shaped pupils. The large eardrums (tympani) are located behind the eyes and conspicuous for their size. The front limbs are short with un-webbed hands. The strong longer back legs have webbing between the digits except for the fourth toe.

Male bullfrogs aggregate into groups called choruses. External fertilization occurs when the female’s batch of eggs and the male’s sperm are released simultaneously in shallow water among vegetation. The embryos hatch in 3-5 days. In water temperatures above 90°F, developmental abnormalities result.  Normal development is interrupted at temperatures below 59 °F. Newly hatched tadpoles have three pairs of external gills. Water flowing through the gills carries bacteria, single-celled algae and protozoa that become trapped in a filtration organ in their pharanges. Mature bullfrogs can eat invertebrates, crayfish, snails and insects. Their mucous-coated tongue can be rapidly extended to attach to an insect or other prey. The tongue is then rapidly retracted back into its mouth.

Visit the Kansas Herpetofaunal Atlas for a bullfrog recording http://web.fhsu.edu/ksfauna/herps/index.asp?page=species&species_id=515-849&dots=yes&tributaries=yes&isAnura=&map=ks. The red fox has a long muzzle and long ears. Its rusty red fur includes a bushy tail with a white tip but black ears & feet. Although the red fox originated in North America, the subspecies in Kansas is believed to have descended from foxes brought to North America by British settlers for fox hunting (vulpes vulpes regalis). It is most common in the eastern third of Kansas where it occupies its range for life (perhaps

6-9 years) but has also spread into western Kansas and occupies every county in the state. The red fox avoids open terrain and prefers woodlands but croplands and urban fringes are appealing also. Their dens are 3-4 feet below ground and connected to several tunnels. They can be seen a couple of hours before sundown or after sunrise but are mostly nocturnal. Their primary food source consists of cottontail rabbits, mice and voles; but they also eat fruits, berries, insects, ground-nesting birds & their eggs plus carrion. The white head and tail feathers of an adult Bald eagle are conspicuous identifying features. Females can weigh 14 pounds with wingspans of 8 feet. Male eagles weigh less, 10 pounds with a wingspan of 6 feet.
At one time its historic range (Alaska and Canada to northern Mexico) supported 500,000 birds. Its numbers declined dramatically when DDT was introduced after World War II to kill mosquitoes and other insects. DDT rendered eggshells of Bald eagles, peregrine falcons and brown pelicans too fragile to survive incubation. Some eagles also died from lead poisoning probably ingested from prey. Since Bald eagles are at the top of the food chain, toxic chemicals are concentrated in the contaminated fish or other ingested prey. Habitat destruction and illegal shooting also played a crucial role in their decline. From a low of 417 breeding pairs in 1963, populations in the lower 48 states grew to a high of
9,789 pairs today. Habitat protection provided by the Endangered Species Act, the Environmental Protection Agency’s banning of DDT, and other conservation actions sparked a dramatic recovery of bald eagles. During winter, migrants are found near large reservoirs and rivers in Kansas.
Bald eagle nests have increased in Kansas since 1989. A bald eagle’s can lift a 4-pound fish out of the water. An eagle’s vision is at least four times that of a person with perfect vision. In 2007, the U. S. Fish & Wildlife Service announced the recovery of the Bald eagle and removed it from the threatened and endangered species lists. Bald eagles will continue to be protected by the federal Bald Eagle Protection Act and the Migratory Bird Treaty Act that prohibit killing, selling, or otherwise harming eagles, their nests, or eggs.

Join NestWatch for a Season of Discovery

Got Barn Swallows plastering mud in the eaves? Perhaps a chubby dove is piling sticks in the window box or a pair of American Robins is scoping out the red maple for a nest site. Keeping an eye on nearby nests can make this spring a season of discovery for you and for scientists hoping to better understand nesting birds. Make this the season to join NestWatch, a citizen-science project from the Cornell Lab of Ornithology.
NestWatchers have been tracking trends in the nesting success of hundreds of species of birds across the country for nearly 50 years. Participating is easy: map any cup nest or birdhouse location on the NestWatch website at NestWatch.org. Report the species of nesting bird and the timing for how many eggs are laid, how many eggs hatch, and how many young leave the nest. Surprises may be in store as the lives of these feathered families unfold.
During the 2013 NestWatch season, participant Gerald Clark monitored a bluebird nest and noticed one egg was much larger than the others. At hatching time-twin bluebirds emerged!
“It’s the first report of twinning in Eastern Bluebirds,” says NestWatch project leader Robyn Bailey. “The finding was so notable that it was written up and published in a scientific journal. We learn new things all the time, even about a species as well studied as the Eastern Bluebird.”
Researchers are also asking NestWatchers to be on the look-out for nesting Eurasian Collared-Doves. The species was introduced to the  in the 1970s, entered  in the 1980s, and then rapidly colonized most of , especially areas converted to agriculture and urban uses. More than 30 years later, scientists still know very little about their breeding habits in .
“We don’t know how often these doves nest in a single season and how successful they are,” says Bailey. “We’re interested in any possible effects on native species, especially other kinds of doves, so we’re asking anyone who finds a Eurasian Collared-Dove nest to report it to NestWatch.”
Monitor one nest or twenty – NestWatch can be a wonderful learning experience for the whole family. Sign up and learn more about how to find and observe nests at www.NestWatch.org.

Conservation Vice President for the Kansas Wildlife Federation honored by Audubon of Kansas.

Audubon of Kansas has bestowed Steve Sorensen of the Kansas
Wildlife Federation with one of their most distinguished awards: the Earth Keeper Award for Professional
Excellence in Wildlife, Conservation Advocacy & Partnership Outreach. 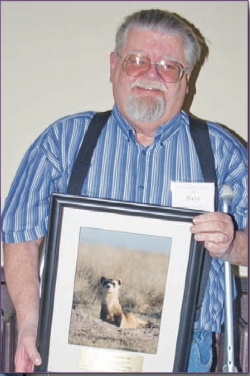 Although members of the Kansas Wildlife Federation know
Steve and his indefatigable efforts on behalf of Kansas Wildlife and habitat,
many others across the state also recognize his important role over the years
for advocating for responsible stewardship of Kansas Wildlife. The
Spring/Summer issue of Audubon of Kansas offers this summary of Steve’s Kansas
story.

“He attended Iowa State University and
graduated with a Bachelor’s of Science degree in Fisheries and Wildlife
Biology. He started work with the Kansas Forestry, Fish and Game Commission in
1973 as a District Wildlife Biologist stationed in Hutchinson. Steve became the
Northcentral Wildlife Supervisor in Concordia in 1979. He was transferred to
Southcentral Regional Fish and Wildlife Supervisor for KDWP in 1988 during
reorganization. Steve initiated and supervised the department’s Walk-In Hunting
Access (WIHA) program and he initiated the agency’s forbs collection and
production program. He helped establish and was a leader of the Sand Hills
Audubon Society, and provided leadership as well for the Kansas Audubon
Council, the Kansas Chapter of The Wildlife Society and formed a chapter of
Ducks Unlimited. Steve has been a stalwart volunteer with the Kansas Wildlife
Federation since the early 1980’s, and he initiated KWF’s Outdoor Adventure
Camp at Rock Springs 4-H Ranch. 2013 was the 25th anniversary of the camp.”