The Willis Scholarship Foundation, in conjunction with the Governor’s One Shot Turkey Hunt, invites students currently enrolled in a Kansas regent’s institution pursuing a degree relating to wildlife, natural resources, and/or natural resource management to apply for a scholarship. The application period is open now through June 10, 2014.

Created in memory of Wayne Willis, a long time supporter of the Governor’s One Shot Spring Turkey Hunt and renowned wildlife artist from the Wichita area, the scholarship foundation started in 1996 when the Past Shooters & Guides Association offered two $1000 scholarships. Since then, approximately $400,000 has been awarded to Kansas students.

Successful applicants can be awarded $500 – $1,250 per semester, based on grade point average and the following criteria:

– desire to pursue a career in wildlife or natural resources

– maintain at least a2.5 GPA, pursuing a bachelor’s degree or higher

The 28th annual Kansas Governor’s One Shot Turkey Hunt will be held April 10, 11and 12, 2014 in El Dorado. Hunters from across the U.S. are participating this year, including Kansas Governor Sam Brownback.

Passing on the hunting heritage to the next generation remains a continued focus for the event. Twenty-three Kansas youth applied for a chance to participate in the Kansas Governor’s One Shot Turkey Hunt Youth Program 2014. Riley Brown of El Dorado, Allison Dix of Stockton, Joseph Heimann of Hays, Avery Lewellen of Wellington, Ethan Shaw of Logan and Jenna Smithson ofOsageCity are the six chosen this year.

For more information on the Willis Scholarship Foundation, Inc., and to receive an application, visitwww.centralkansascf.org/non-profit-organizations/scholarships/. 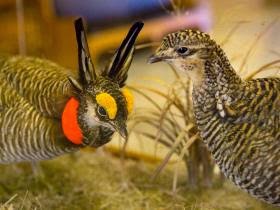 THAD ALLTON/THE CAPITAL-JOURNAL
A display showing the lesser prairie chicken stands in
the hallway on the second floor of the Kansas statehouse.
By Andy Marso
Topeka Capital-Journal
The U.S. Fish and Wildlife Service’s decision to list the lesser prairie chicken as “threatened” spurred House members to act Tuesday, passing a Senate bill telling the feds to back off.
Rep. Sharon Schwartz said the listing, which also caused Gov. Sam Brownback to announce the state will join an Oklahoma lawsuit against the federal action, led her to bring Senate Bill 276 back to the House Agriculture and Natural Resources Committee she chairs.
“If this branch of government wants to have a position on this issue, this is our opportunity,” Schwartz said.
Prairie chicken numbers in their five-state range have dropped from almost 100,000 in 2001 to about 17,500 last year. ButKansas is working with the other four states on a regional conservation plan and had asked the U.S. Fish and Wildlife Service to go along with that.
In rendering the decision to list the bird as threatened, the service said it had carefully weighed those requests against the concerns of environmentalists who said the only way to prevent the species extinction would be to give it the more stringent “endangered” label.
Ron Klataske, executive director of Audobon Kansas, said the state had lost conservationists’ trust with half-hearted attempts to stem the declines of species like whooping cranes, black-tailed prairie dogs and black-footed ferrets.
“Unfortunately the state of Kansas is threatening to discard sound science and imperiled species, and its own credibility,” Klataske said.
The fish and wildlife service said that in writing its protection rules for the lesser prairie chicken under the threatened designation it would give “unprecedented” deference to the regional five-state plan.
The protection rules haven’t yet been published, but Schwartz echoed dire predictions by Brownback and Kansas Department of Wildlife, Parks and Tourism Secretary Robin Jennison.
“It’s going to be devastating to western Kansas,” Schwartz said.
Still, Schwartz moved to soften the bill, offering an amendment.
As brought by Secretary of State Kris Kobach and passed by the Senate 30-10, the original bill would have made it a felony for a federal agent to regulate lesser and greater prairie chickens within Kansas.
Schwartz’ amendment, adopted by the committee, would decriminalize the actions of federal wildlife agents performing their job duties, while still offering the opportunity to petition courts to stop them.
Rep. Tom Moxley, R-Council Grove, said the bill still runs a strong risk of embroiling the state in a lawsuit that it will be unlikely to win because court precedents have frequently affirmed that federal law trumps state law when the two conflict.
“When it comes to the supremacy clause, it’s been successful to challenge that one or two times in history,” Moxley said. “And how many times was it tested? Thousands.”
Rep. Ed Trimmer, D-Winfield, questioned some of the language in the bill, but said he didn’t believe it would be relevant to the prairie chicken question in the end.
“This is going to end up in litigation anyway and the court’s going to make that determination,” Trimmer said.
Rep. Tom Sloan, R-Lawrence, called the bill “unnecessary” given the state’s lawsuit with Oklahoma, but “much more palatable than the original version.”

By Daniel Xu
The OutdoorHub 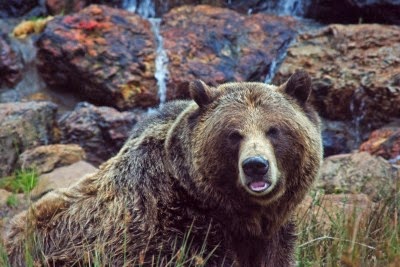 Yellowstone‘s grizzlies could be delisted as early as next year.
Federal officials say that a study on whether Yellowstone’s grizzly bears should be removed from the Endangered Species List could be finished as early as this fall. According to the Jackson Hole News and Guide, Grizzly Bear Recovery Coordinator Chris Servheen said in an interagency meeting that Yellowstone’s grizzlies could be delisted by this time next year.
Former US Interior Secretary Ken Salazar announced last year that the US Fish and Wildlife Service (USFWS) will be seeking to delist the estimated 600 grizzlies in YellowstoneNational Park. After more than 30 years of restoration efforts, the agency considers the species to be recovered. Not all conservationists agree with this sentiment, saying that the position occupied byYellowstone’s bears is fragile.
In 2007, the USFWS managed to successfully delist Yellowstone’s grizzlies, but restored the species’ federally protected status less than two years later due to a court case. The plaintiffs behind the lawsuit argued that the USFWS did not account for the dwindling number of whitebark pine in the park. The pine’s nuts are a major food source for the bears, and their decline could threaten the grizzly population.
“The gains are precarious,” Louisa Willcox of the National Resources Defense Council said at the time. “Grizzles are low-reproducers. You can turn increased numbers into a decline very quickly.”
However, a later report by the Interagency Grizzly Bear Study Team found that the whitebark decline had little impact on the bears. Wyoming and federal biologists added that bears thrive in plenty of areas where whitebark pine is not available.
The USFWS is currently conducting a five-pronged study into whether Yellowstone’s largest carnivore should be delisted. Factors taken into account are the status of Yellowstone’s bear habitat, threats from disease or predation, protection given to the bears by other laws, threats to the species from commercial or recreational overuse, and other issues that might affect the continued survival of the population.
“That will all be done, we expect, by this fall,” Servheen said.
At that point the USFWS will decide whether it will further pursue efforts to delist Yellowstone’s bears.