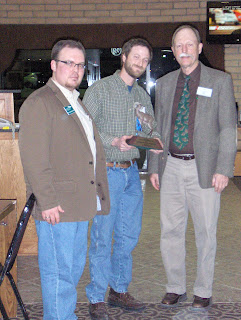 The Kansas Wildlife Federation (KWF) proudly announces winners of the 2012 Conservation Achievement Program Awards (CAP). KWF honored thirteen recipients on February 23rd at a reception and banquet in their honor in .
For 49 years, the Federation has recognized Kansans who have devoted exceptional efforts for wildlife conservation in the state. Kansans, who wished to recognize the awardees for their contributions, supplied the nominations.
The CAP awards are given in several categories including youth, land, water, wildlife, forest, education, farming and ranching. For 2012, 12 awards were given, along with the President’s special award for meritorious service to the KWF.
These are the most prestigious conservation-related awards given in  and are patterned after similar awards in most other states through respective state affiliates of the National Wildlife Federation. Long-time professor of biology at   , Robert Robel of  won the overall award, Conservationist of the Year. Dr. Robel passed away last month so his wife, Anise, accepted the award in his place.
Award sponsors for these awards included Westar, Inc., Kansas State Chapters of the National Wild Turkey Federation, Kansas Chapter of the Wildlife Society, Kansas Chapter of the American Fisheries Society, Geary County Fish and Game Association, the Watershed Institute, the Jim Ruder family of WaKeeney, Kansas Farmers Union and the Emporia Area Chapter of the Quail and Upland Wildlife Federation.
The 2012 Farmer/Rancher Wildlife Conservationist Award was presented to Caleb Stotts of Fredonia. Caleb has a tremendous interest in the natural history and conservation of biodiversity on the Stotts Ranch in west of Fredonia. He manages this property as part of his family’s LLC partnership trust. A alum, Caleb developed his interest in ecology from Kelly Kindscher. Caleb has worked actively with conservation and academic communities in improving the environmental quality of the ranch.
Caleb coordinated with the U.S. Fish and Wildlife Service and professors at    and to arrange for habitat restoration on the 6,300-acre native prairie ranch. Funded under a Partners For Wildlife grant, the management plan is to be done on a landscape-scale design. The plan calls to restore the native savanna from a closed-canopy, encroached forest and then evaluate the responses of flora and fauna. Caleb also performed the tree stand thinning and other habitat work in the field.
Caleb is great to work with, providing access to this tremendous landscape for ESU and WSU biologists (and some folks from U of Missouri as well) who have been doing studies related to black jack and post oak savanna conservation on the ranch. He has actively inquired about their findings and has attended formal presentations by these biologists at various meetings.
Even before the activities stated above, Caleb was lead author on a paper describing the need for savanna conservation in the Cross Timbers region (Stotts et al. 2007,  Native Plant Record 7:78). Caleb truly has genuine interests and active involvement in the conservation of biodiversity on the family’s ranch.
The Stotts Ranch supports numerous Greater Prairie-chicken leks. Personnel from the Kansas Department of Wildlife, Parks and Tourism have surveyed GRPCs and other grassland birds there.
The Kansas Farmers Union of McPherson sponsored the Farmer/Rancher Wildlife Conservationist of the Year award.
Caleb Stotts is an excellent steward of prairie wildlife and their habitat and a fitting recipient of the Kansas Wildlife Federation Farmer/Rancher Wildlife Conservationist of the Year award for 2012.

Governor’s Conference on the Future of Water in Kansas

Posted On August 3, 2013
Registration is now open for the annual Governor’s Conference on the Future of Water in Kansas to be held October 24-25 at the Hilton Garden…

Posted On September 25, 2014
National Shoot to Retrieve Association NSTRA pointing and retrieving field events are an excellent way for the hunter to keep man’s best friend in shape and…