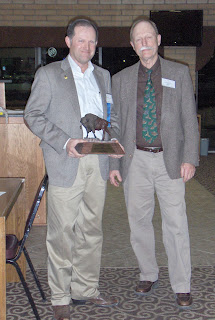 The Kansas Wildlife Federation (KWF) proudly announces winners of the 2012 Conservation Achievement Program Awards (CAP). KWF honored thirteen recipients on February 23rd at a reception and banquet in their honor in .
For 49 years, the Federation has recognized Kansans who have devoted exceptional efforts for wildlife conservation in the state. Kansans, who wished to recognize the awardees for their contributions, supplied the nominations.
The CAP awards are given in several categories including youth, land, water, wildlife, forest, education, farming and ranching. For 2012, 12 awards were given, along with the President’s special award for meritorious service to the KWF.
These are the most prestigious conservation-related awards given in  and are patterned after similar awards in most other states through respective state affiliates of the National Wildlife Federation. Long-time professor of biology at   , Robert Robel of  won the overall award, Conservationist of the Year. Dr. Robel passed away last month so his wife, Anise, accepted the award in his place.
Award sponsors for these awards included Westar, Inc., Kansas State Chapters of the National Wild Turkey Federation, Kansas Chapter of the Wildlife Society, Kansas Chapter of the American Fisheries Society, Geary County Fish and Game Association, the Watershed Institute, the Jim Ruder family of WaKeeney, Kansas Farmers Union and the Emporia Area Chapter of the Quail and Upland Wildlife Federation.
The 2012 Wildlife Conservationist Award was presented to Matt Smith of . Matt has had a long and successful career with the Kansas Department of Wildlife, Parks, and Tourism (KDWPT). He started as a District Wildlife Biologist in the SW area, and then moved to a similar position in the NW at . He took on the additional responsibility as a Natural Resources and Conservation Service (NRCS) Area Biologist.
After the retirement of the full-time Farm Bill Coordinator, Matt assumed those duties as well for a period of time. A couple years ago he was relieved of the NRCS duties and many of his district duties so he could focus on Farm Bill issues. With most all  land in agriculture production and management of this land highly influenced by the federal Farm Bill, this activity is very important to the welfare of  wildlife populations and their habitat.
In the Farm Bill position Matt has excelled at coordination among various United States Department of Agriculture (USDA) agencies, non-governmental groups like Pheasants Forever and KDWPT. He has been active in working with national committees and working groups, like the Midwest Association of Wildlife Agencies, to influence the development of the conservation title of the Farm Bill in Congress. These groups have been very successful with programs such as the Conservation Reserve Program (CRP). At its high, over 3-million acres of land was planted to CRP grasses in .
Matt has always been willing to step up and do additional duties that may not have been his primary responsibility, often working in more than one capacity. An example of this occurred recently when Matt took the lead in the acquisition of the 160-acre Gurley Wetland in  for KDWPT, overcoming several hurdles typical for these projects. Generations of hunters and wildlife enthusiasts to come will enjoy this marsh due to Matt’s dedicated work. Because of his positive contact with Matt, Mr. Gurley has made additional contributions to promote youth hunting.
In addition to his official duties, Matt has worked with several professional organizations. Having served in several lower positions, he currently is the President of the Kansas Chapter of The Wildlife Society. Matt has been instrumental in coordinating the Kansas Natural Resource Conference, serving on the Steering Committee the last three years and as the Program Committee Chair the last two years.
The Kansas Chapter of The Wildlife Sociaty sponsored the Wildlife Conservationist of the Year award.
Matt Smith has provided dedicated service to KDWPT and the sportsmen and sportswomen of  in a professional way. The Kansas Wildlife Federation is proud to present the Wildlife Conservationist of the Year award for 2012 to Matt Smith.

Posted On June 24, 2013
Our friends at the National Shooting Sports Foundation (NSSF) have launched a new Project ChildSafe website as part of its “S.A.F.E. Summer” campaign. The new site,…

Posted On September 26, 2013
Each hunter will have the opportunity to harvest at least four birds during this free hunt The Smoky Hill Pheasants Forever (PF) chapter, in cooperation…