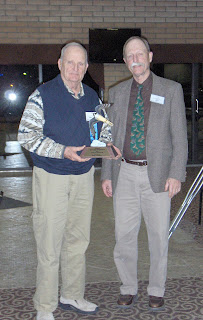 The Kansas Wildlife Federation (KWF) proudly announces winners of the 2012 Conservation Achievement Program Awards (CAP). KWF honored thirteen recipients on February 23rd at a reception and banquet in their honor in .
For 49 years, the Federation has recognized Kansans who have devoted exceptional efforts for wildlife conservation in the state. Kansans, who wished to recognize the awardees for their contributions, supplied the nominations.
The CAP awards are given in several categories including youth, land, water, wildlife, forest, education, farming and ranching. For 2012, 12 awards were given, along with the President’s special award for meritorious service to the KWF.
These are the most prestigious conservation-related awards given in  and are patterned after similar awards in most other states through respective state affiliates of the National Wildlife Federation. Long-time professor of biology at   , Robert Robel of  won the overall award, Conservationist of the Year. Dr. Robel passed away last month so his wife, Anise, accepted the award in his place.
Award sponsors for these awards included Westar, Inc., Kansas State Chapters of the National Wild Turkey Federation, Kansas Chapter of the Wildlife Society, Kansas Chapter of the American Fisheries Society, Geary County Fish and Game Association, the Watershed Institute, the Jim Ruder family of WaKeeney, Kansas Farmers Union and the Emporia Area Chapter of the Quail and Upland Wildlife Federation.
The 2012 Stream Monitor Award was presented to Mike Calwell of .  A lifelong  resident, Mike has always been attracted to water. He dedicated himself to swimming, first as a high school and college All American, next as an age group and high school swim coach, and now as a Masters swimmer.
Mike is not only a founding board member of Friends of the Kaw (FOK) (www.kansasriver.org), but his vision of creating access points every ten miles along the 173 mile long river has helped drive and sustain this grassroots environmental organization. Over nearly two decades Mike has dedicated countless volunteer hours to protecting the  (known locally as the “Kaw”) for future generations. With a unique and collaborative approach to working with communities on building river access points, Mike has inspired both private and public entities to donate over $1 million in in-kind donations. His efforts have literally transformed the  – for the better.
When Mike started building boat ramps ten years ago, there were just three access points along the Kaw. Mike has built or assisted in building twelve ramps that now provide citizens and tourists of  with recreational access to one of our state’s three public waterways. The minimum price tag for a river access ramp is about $100,000, but Mike is able to keep project costs around $25,000 by using in-kind donations (engineering plans, construction, and other materials from local companies and public entities).
In July of 2012, Secretary of the Interior, Ken Salazar, arrived in  to take a Kaw river boat trip with Governor Brownback and dedicate the  as a National Water Trail. Salazar specifically thanked FOK for the work of providing accessibility. Mike’s many years of providing river access was an integral part of this effort. This designation will include further assistance in project funding as well as awareness opportunities.
Since 1994 Mike has organized and led educational canoe floats on the . Mike used his own river and paddling knowledge to develop operational and safety guidelines and logistics for these very successful float trips. Thousands of individuals have now experienced the beauty of this prairie river.
Mike’s natural passion for education has led to a series of “sandbar seminars” featuring various river experts. Mike has led numerous public presentations on river morphology and the effects of sand dredging on river health and long-term viability.
Twenty years ago, Kansans considered the  a “dirty” river, if they thought about it much at all. Thanks in large part to the leadership of dedicated volunteer Mike Calwell, the state and federal government are now starting to realize the river’s potential as a beautiful, historic, and recreational treasure.
The Watershed Institute of Topeka sponsored the Stream Monitor of the Year award.
For all his efforts Mike Calwell deserves to be recognized as the 2012 Stream Monitor of the Year by the Kansas Wildlife Federation.

Posted On February 25, 2015
Beavers and otters may be trapped through March 31   The 2014 trapping season is coming to a close, and just as one season…

Posted On August 31, 2014
As we enjoy the many natural wonders provided by our county, state & national parks across the country during this long Labor Day weekend, it…

‘Pass It On – Outdoor Mentors’ get kids playing outside again