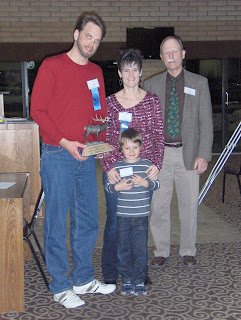 The Dean family, Paul, Kristan and Octavian, from , receive the 2012 Forest Conservationist award from Troy Schroeder, Kansas Wildlife Federation President, right. The Kansas State Chapters of the National Wild Turkey Federation sponsored the Forest Conservationist award.
The Kansas Wildlife Federation (KWF) proudly announces winners of the 2012 Conservation Achievement Program Awards (CAP). KWF honored thirteen recipients on February 23rd at a reception and banquet in their honor in .
For 49 years, the Federation has recognized Kansans who have devoted exceptional efforts for wildlife conservation in the state. Kansans, who wished to recognize the awardees for their contributions, supplied the nominations.
The CAP awards are given in several categories including youth, land, water, wildlife, forest, education, farming and ranching. For 2012, 12 awards were given, along with the President’s special award for meritorious service to the KWF.
These are the most prestigious conservation-related awards given in  and are patterned after similar awards in most other states through respective state affiliates of the National Wildlife Federation. Long-time professor of biology at   , Robert Robel of  won the overall award, Conservationist of the Year. Dr. Robel passed away last month so his wife, Anise, accepted the award in his place.
Award sponsors for these awards included Westar, Inc., Kansas State Chapters of the National Wild Turkey Federation, Kansas Chapter of the Wildlife Society, Kansas Chapter of the American Fisheries Society, Geary County Fish and Game Association, the Watershed Institute, the Jim Ruder family of WaKeeney, Kansas Farmers Union and the Emporia Area Chapter of the Quail and Upland Wildlife Federation.
The 2012 Forest Conservationist Award was presented to Paul and Kristan Dean of . The Paul and Kristan Dean family has been improving the woodland and forest resources on their Greenwood County Tree Farm for over 40 years, following the recommendations of professional foresters and wildlife biologists. Paul Dean learned the values of forest and wildlife conservation from his father, Kenneth, who involved him in timber and wildlife habitat improvement projects since he was a boy, including the marking of 21,000 board feet of timber in 1971 for thinning and harvest. Another 20 acre timber stand improvement practice was conducted in 1981 followed by a timber harvest in 1994. Each harvest and timber stand improvement practice improved the health of the forest, removing undesirable trees, such as honeylocust and Osage orange, and releasing higher quality trees such as black walnut and bur oak which also increased acorn production for deer and other wildlife.
Because of these efforts the American Tree Farm System recognized the property in 2003 as meeting their eight standards of forest sustainability and 112 acres of woodlands surrounding Halderman Creek were certified as a Tree Farm.  Most recently thousands of black walnut and bur oak were planted on 8 acres and an additional 6 acres of timber stand improvement work was completed. The Dean family accomplishes all this work on their own.
In addition to their woodlands, the Dean family has worked to improve the health of their grasslands by removing woody species thus improving habitat for upland birds. The Deans have also established grass buffers adjacent to Halderman Creek to improve both water quality and wildlife habitat.
In 2009 the Dean’s hosted a woodland management field day as part of the local Watershed Restoration and Protection Strategy (WRAPS) project. The field day informed around 30 people on proper forest management and sustaining water quality by protecting and managing riparian areas. A lawyer by profession, Paul provided his services to enable the Kansas Forestry Association to obtain Not-for-Profit status as a 501(c) 3. The Kansas Forest Service, Kansas Forestry Association, Kansas Tree Farm Committee and Kansas Chapter of the Walnut Council recognized Paul and Kristan as the 2012 Forest Stewardship Tree Farmers of the Year for the exceptional stewardship of their property.
Paul and Kristan Dean are not only interested in conserving and managing the forest, woodland and wildlife resources on their property, they are encouraging others to leave a legacy of good environmental stewardship for future generations, including their son, Octavian.
The Kansas State Chapters of the National Wild Turkey Federation sponsored the Forest Conservationists of the Year award.
For their dedication and interest in sustaining the quality and productivity of woodlands and the wildlife that benefit from them, Paul and Kristan Dean are the winners of the 2012 Kansas Wildlife Federation Forest Conservationists of the Year.

Posted On February 4, 2016
Yes – I am registering for the KWF Annual Meeting to be held February 26th at the Great Plains Nature Center at 6232…

Posted On November 25, 2014
Your backyard bird images could win great prizes!   The Cornell Lab of Ornithology's BirdSpotter photo contest is underway! The contest is sponsored by Vanguard and offers…

Posted On April 5, 2015
By Mark Kenyon Wired To Hunt   We’re finally getting some warm weather up here in Michigan and the months-long blanket of snow is…