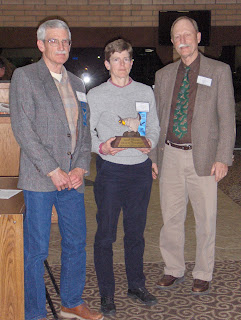 The Kansas Wildlife Federation (KWF) proudly announces winners of the 2012 Conservation Achievement Program Awards (CAP). KWF honored thirteen recipients on February 23rd at a reception and banquet in their honor in .
For 49 years, the Federation has recognized Kansans who have devoted exceptional efforts for wildlife conservation in the state. Kansans, who wished to recognize the awardees for their contributions, supplied the nominations.
The CAP awards are given in several categories including youth, land, water, wildlife, forest, education, farming and ranching. For 2012, 12 awards were given, along with the President’s special award for meritorious service to the KWF.
These are the most prestigious conservation-related awards given in  and are patterned after similar awards in most other states through respective state affiliates of the National Wildlife Federation. Long-time professor of biology at   , Robert Robel of  won the overall award, Conservationist of the Year. Dr. Robel passed away last month so his wife, Anise, accepted the award in his place.
Award sponsors for these awards included Westar, Inc., Kansas State Chapters of the National Wild Turkey Federation, Kansas Chapter of the Wildlife Society, Kansas Chapter of the American Fisheries Society, Geary County Fish and Game Association, the Watershed Institute, the Jim Ruder family of WaKeeney, Kansas Farmers Union and the Emporia Area Chapter of the Quail and Upland Wildlife Federation.
The 2012 Land and Soil Wildlife Conservationist Award was presented to Randy Rodgers and Helen Hands of Hays. Randy provided years of valuable service to the sportsmen of  as Upland Bird Research Biologist for the Kansas Department of Wildlife, Parks and Tourism. He researched and developed options to improve habitat on private land in conjunction with crop production. Now retired, Randy is spending his time “practicing what he preached,” developing wildlife habitat on four tracts of  land purchased by him and his wife Helen, also a former KDWPT biologist. They have developed state-of-the-art upland bird habitat on this land, while keeping much of it in crop production.
They used federal Farm Bill Program practices, mostly the Conservation Reserve Program (CRP), to establish native grass and shrubs in strategic locations. The really cool thing is that these areas have been designed with farming ease in mind. Grassed terraces and other areas were designed to eliminate point rows and other hard-to-farm spots. The remaining crop fields were laid out in even sprayer or planter widths to prevent overlap. Although the aerial views of their properties look complicated, they are strikingly attractive and fields are easy to farm. It is no surprise that these areas are also a hunter’s paradise.
After a couple years, the plan proved successful. In a year of low pheasant numbers in the surrounding area, their land still had good numbers of birds. If you provide all necessary habitat components in close proximity, you will have birds. Of course, other species like rabbits and deer like it too.

Not walking away from their life’s work, Randy and Helen have demonstrated how to build ideal upland bird habitat on a productive farm. They have already been contacted by others wanting information about creating something similar.

One field has a low area that was developed into a wetland. When it has water, it provides a great place for shorebirds and waterfowl.
Randy and Helen have put their philosophy into practice for many years and implemented sound management practices for crops and wildlife. They are very deserving of being recognized as the 2012 Land and Soil Wildlife Conservationists of the Year by the Kansas Wildlife Federation. 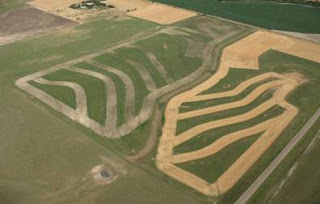 Posted On August 28, 2015
Governor Sam Brownback is scheduled to sign a proclamation declaring Saturday, September 26 as National Hunting and Fishing Day in Kansas. The signing will take…

Posted On December 10, 2012
Law doesn’t allow hunters to radio or phone the location of game animals             You see a big buck moving in the direction of your buddy’s…

Earth Day was founded 33 years Ago on April 22nd!