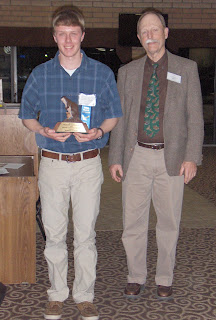 Stephen DeHart, left, from , received the 2012 Youth Conservationist of the Year award from Troy Schroeder, Kansas Wildlife Federation President. The Bundleflower Plant and Wildflower Preserve (the Jim Ruder family of WaKeeney) sponsored the Youth Conservationist award.
The Kansas Wildlife Federation (KWF) proudly announces winners of the 2012 Conservation Achievement Program Awards (CAP). KWF honored thirteen recipients on February 23rd at a reception and banquet in their honor in .
For 49 years, the Federation has recognized Kansans who have devoted exceptional efforts for wildlife conservation in the state. Kansans, who wished to recognize the awardees for their contributions, supplied the nominations.
The CAP awards are given in several categories including youth, land, water, wildlife, forest, education, farming and ranching. For 2012, 12 awards were given, along with the President’s special award for meritorious service to the KWF.
These are the most prestigious conservation-related awards given in  and are patterned after similar awards in most other states through respective state affiliates of the National Wildlife Federation. Long-time professor of biology at   , Robert Robel of  won the overall award, Conservationist of the Year. Dr. Robel passed away last month so his wife, Anise, accepted the award in his place.
Award sponsors for these awards included Westar, Inc., Kansas State Chapters of the National Wild Turkey Federation, Kansas Chapter of the Wildlife Society, Kansas Chapter of the American Fisheries Society, Geary County Fish and Game Association, the Watershed Institute, the Jim Ruder family of WaKeeney, Kansas Farmers Union and the Emporia Area Chapter of the Quail and Upland Wildlife Federation.
The 2012 Youth Conservationist Award was presented to Stephen DeHart of . Two years ago Stephen was working on   ‘s Ornate Box Turtle research project at the . Jeff Witters had founded this project at  and then took Stephen under his wing to teach him the ways of birding.
Stephen’s dedication for wanting to be out in ‘ summer heat while tracking turtles through the underbrush was noteworthy. His knowledge for ‘ flora and fauna increased almost exponentially. He seemed to be like a sponge and soaked up information as fast as he could read or experience it.
Because of the expertise he developed that summer, Stephen was asked by Rene Gloshen, Student Naturalist Teacher at   , to be part of their  Eco-meet team. He was unable to participate because he was already on the cross country team. Two weeks before the regional Eco-meet that fall, he stopped by Ms. Gloshen’s office asking if he could be on an eco-meet team. Due to an injury he could not run. Bad for cross country but great for Ms. Gloshen! She had not found enough students who wanted to do the Eco-meet but because Stephen wanted to do this they got busy and pulled together a team. Stephen took 1st place in Ornithology and at both regional and State after practicing as a team only twice!
This past fall, with Stephen leading the group, Olathe South not only had 3 regional teams, but his team qualified for State. Once again Stephen took 1st in Ornithology at State. What was amazing to watch was Stephen’s desire to teach the other team members about ‘ birds. He went into great detail and made power point presentations and practice quizzes for everyone. He showed them the minute details between some of the more difficult species to identify.
Currently Stephen is in the Student Naturalist class. He has exhibited an amazing drive to learn the finest details not just in birds but in all areas of conservation and ecology. Other students want to sit next to him in class because he has a way of teaching new study methods and giving them confidence that they too can learn to identify our native species.
It is hard to say which area of the life sciences will end up winning Stephen over, but whatever path he chooses it will always be laced with a love of wildlife.
The Bundleflower Plant and Wildflower Preserve (the Jim Ruder family of WaKeeney) sponsored the Youth Conservationist of the Year award.
For his deep interested in wildlife conservation and ecology and especially for his teaching contributions to his fellow students, the Kansas Wildlife Federation is pleased to present our Youth Conservationist of the Year award for 2012 to Stephen DeHart.

Posted On July 27, 2012
It's already been a hot summer in the Sunflower State, and those who love outdoor activities are beating the heat during bullfrog season, which began July 1.…

Posted On September 13, 2013
April showers might bring May flowers, but fall brings neotropical migrants Every year, hundreds of bird species fly south through Kansas during the fall migration, creating many…

Posted On August 8, 2013
Kansas Native Plant Society’s (KNPS) Annual Wildflower Weekend! Anyone who has been to the Kansas…