The Bugs of Summer

Elby Adamson
As summer draws to a close, those of us who appreciate nature wonder about the bugs that came with the season and will soon disappear. Sure some bugs, ticks, mosquitoes and others can appear much earlier during the spring months, but certain bugs belong to the summer.
Of these, the cicada provides many people with evening music because of its singing. My wife rolls down the car windows on summer evenings as we travel through wooded areas so she can “hear the locusts sing.”
The cicadas aren’t actually singing. Male cicadas make the most well known sound as they use their tymbals (abdominal muscles in the mostly hollow abdomen) like tiny drums. They flex the tymbals rapidly and produce what can be, when they are gathered in large numbers, almost deafening sound. Females also produce sound by using their wings but it is not as loud or singular as what the males do.

Cicada, http://www.gpnc.org/cicadas.htm
Cicadas aren’t really locusts, but many people call them locusts. I remember as a child picking the split, dried shells of locusts off of trees and wondering if the strange insects that had emerged from them would bite.
Of course locusts or cicadas are harmless except for the possible damage the larva do to certain tree and plant roots. I am reminded, however, that about a week ago, I received a swat from one as I was traveling down the highway with my window open and got hit by a locust on the left side of my face. It stung for a bit and the locust was knocked dead. They are big enough that at 50 miles per hour they hit with a bit of force.
Among other summer “bugs” are some unpleasant ones such as robber flies.

Robberfly on Prey, http://en.wikipedia.org/wiki/Asilidae
Frankly, the robber flies have a rather ugly appearance that reflects their personality. They feed on a variety of other insects including in some cases dragonflies, grasshoppers, bees, ants, damselflies and some wasps. They inject their prey with a neurotoxin that paralyzes it and then a chemical that dissolves tissues. The robber flies digest their prey by sucking the liquefied tissues out. A robber fly drew my attention when someone brought a picture of an insect by my office and asked me to identify it. Thankfully, she had smashed it right after taking its picture.
Robert Bauernfeind, extension entomologist at  gave me a quick answer. – “A robber fly (Family: Asilidae). Fun insects to watch. They capture quite large prey.  Insert their long pointed piercing mouthpart to suck the juices from the bodies of their prey. That same mouthpart will give a person a painful jab if he/she carelessly handles a robber fly. Lesson learned real quickly!”
I regard Bauernfeind as a  treasure when it comes to helping identify insects.
He also reassured me that an identification I’d made of a bluet damselfly was correct and he told me there are supposed to be 12 species of bluets in Kansas and that a bluet I’d photographed while on a grasslands tour was probably a female ‘as males (I think) tend to be “all blue” whereas females are not necessarily so —– lighter in color or tannish abdomen.’ 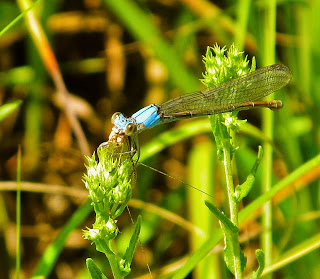 Damselfly, Photo by Elby Adamson
He also confirmed that an alleged Asian Long-horn beetle photographed by a local citizen concerned about neighborhood trees, an insect that I identified as a Cottonwood Borer, was indeed just what I said. 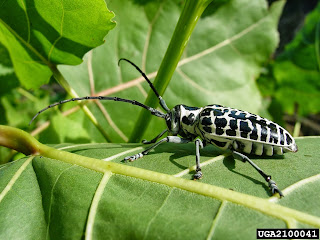 Cottonwood Borer, Charles T. Bryson, USDA Agricultural Research Service, Bugwood.org
The past week has been the week of the dragonfly with enormous numbers of dragonflies filling the air on the bluffs along the river here in North Central Kansas. I was actually glad to see them in enormous numbers, as it would mean they would feed on the mosquitoes that had arrived after the rains a few weeks ago. Dragonflies have beauty and delicacy that is wonderful to behold. 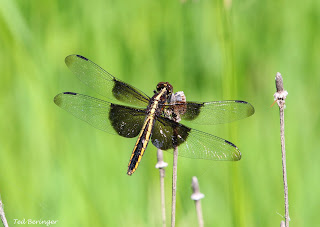 So while there are summer bugs that are nasty like mosquitoes, others as wonderful and welcome as summer itself.

Posted On May 7, 2014
Credit by Alan D. Wilson The Ring-necked pheasant (Phasianus colchicus Linnaeus) is a chicken-like bird that arrived in North America from China in the 1800s…

Action Alert: ESTABLISHMENT OF NEW WILDLIFE REFUGES UNDER ATTACK IN THE HOUSE!

Posted On July 22, 2013
WILDLIFE REFUGES UNDER ATTACK IN THE HOUSE! Background: The Executive branch has created ninety percent of…