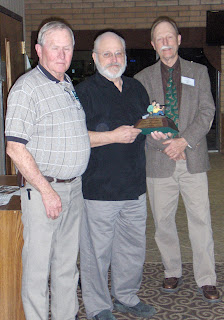 Mike Knotts, center, from Peck, receives the 2012 Outdoor Skills Instructor award from Troy Schroeder, Kansas Wildlife Federation President. Also present is Carl Conley, left, KWF Southcentral District Director. The Outdoor Skills Instructor award was sponsored by the Geary County Fish and Game Association of Junction City.
The Kansas Wildlife Federation (KWF) proudly announces winners of the 2012 Conservation Achievement Program Awards (CAP). KWF honored thirteen recipients on February 23rd at a reception and banquet in their honor in .
For 49 years, the Federation has recognized Kansans who have devoted exceptional efforts for wildlife conservation in the state. Kansans, who wished to recognize the awardees for their contributions, supplied the nominations.
The CAP awards are given in several categories including youth, land, water, wildlife, forest, education, farming and ranching. For 2012, 12 awards were given, along with the President’s special award for meritorious service to the KWF.
These are the most prestigious conservation-related awards given in  and are patterned after similar awards in most other states through respective state affiliates of the National Wildlife Federation. Long-time professor of biology at   , Robert Robel of  won the overall award, Conservationist of the Year. Dr. Robel passed away last month so his wife, Anise, accepted the award in his place.
Award sponsors for these awards included Westar, Inc., Kansas State Chapters of the National Wild Turkey Federation, Kansas Chapter of the Wildlife Society, Kansas Chapter of the American Fisheries Society, Geary County Fish and Game Association, the Watershed Institute, the Jim Ruder family of WaKeeney, Kansas Farmers Union and the Emporia Area Chapter of the Quail and Upland Wildlife Federation.
The 2012 Outdoor Skills Instructor of the Year Award was presented to Mike Knotts of Peck.  Mike has been a Hunter Education Instructor since 1977. Having been certified by the Kansas Forestry, Fish and Game Commission (now the Kansas Department of Wildlife, Parks and Tourism (KDWPT)), Mike has been very active in teaching boys and girls in safely handling firearms, wildlife conservation and hunter ethics.
He has taught over 180 classes with an average of 5 classes a year, organizing 3 of them each year. Of the classes he has organized, 11,570 students have been certified and received their Hunter Education card.
Mike also has been involved with the administration of the Lake Afton Clinic for many years. He has served as an instructor at the Lake Afton Clinic for 35 years. In 2012 the clinic certified 857 students. With an average of 850 students a year, Mike has been involved with helping nearly 30,000 students to be certified in Hunter Education.
Every year KDWPT hears of parents who attended the Lake Afton Clinic and are now taking their kids back to attend for themselves. It would be interesting to see how many second and perhaps third generation Hunter Ed students have been influenced by Mike over the years.
Mike is a Master Instructor and the Area coordinator for south central . Mike has conducted 68 new Instructor orientations or workshops, further extending the influence he has had on young hunters from across.
Mike served on the KDWPT Advisory Committee for many years. He has the respect of the hunter education instructors of  and is looked upon as a mentor to many instructors who continue serving the students during the Lake Afton Clinic.
Mike continues to be very involved with hunter education in the  area and provides support for many activities throughout the area by means of the hunter education equipment trailer that he oversees. He assists instructors as well as other shooting sports activities throughout the area. Mike is very involved in the Sedgwick County Law Days Safety Camp each summer.
He has been an instrumental part of the Young Safe Hunters organization in . In 2011 Mike was nominated for the instructor of the year award. He has been awarded the Order of the  for outstanding instructors.
The Kansas Wildlife Federation is proud to present to Mike Knotts the recognition of Outdoor Skills Instructor of the Year for 2012.

Posted On September 10, 2014
The Silver chub (Macrhybopsis storeriana) lives near the bottom of large sandy rivers. In Kansas it is found in the lower Arkansas River, portions of…

Posted On May 6, 2015
If tradition, self-reliance, hard work, and the great outdoors are all things that ring true for you, The Friends of Maxwell Wildlife Refuge invite…