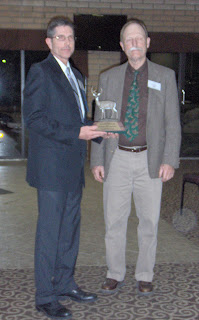 The Kansas Wildlife Federation (KWF) proudly announces winners of the 2012 Conservation Achievement Program Awards (CAP). KWF honored thirteen recipients on February 23rd at a reception and banquet in their honor in .
For 49 years, the Federation has recognized Kansans who have devoted exceptional efforts for wildlife conservation in the state. Kansans, who wished to recognize the awardees for their contributions, supplied the nominations.
The CAP awards are given in several categories including youth, land, water, wildlife, forest, education, farming and ranching. For 2012, 12 awards were given, along with the President’s special award for meritorious service to the KWF.
These are the most prestigious conservation-related awards given in  and are patterned after similar awards in most other states through respective state affiliates of the National Wildlife Federation. Long-time professor of biology at   , Robert Robel of  won the overall award, Conservationist of the Year. Dr. Robel passed away last month so his wife, Anise, accepted the award in his place.
Award sponsors for these awards included Westar, Inc., Kansas State Chapters of the National Wild Turkey Federation, Kansas Chapter of the Wildlife Society, Kansas Chapter of the American Fisheries Society, Geary County Fish and Game Association, the Watershed Institute, the Jim Ruder family of WaKeeney, Kansas Farmers Union and the Emporia Area Chapter of the Quail and Upland Wildlife Federation.
The 2012 Conservation Educator Award was presented to Stephen Pletcher of . Stephen has been a teacher in the  school district since the fall of 1980. He has been the Physical Education teacher at since the fall of 2006.
Steve is an innovative teacher who creates many activities that teach the standards of Physical Education. Mr. Pletcher’s students are taught TREF skills, which stand for Think, Respect, Effort and Focus. His students begin a warm up activity as soon as they enter the gym and each student knows the routine and what is expected. On top of this, Steve spends a great deal of his own time outside of the school day working with students. After noticing that many of the students sit in the gym before school, he created a morning walking program for students. Students received awards for the mileage that they walked or ran. Student helpers kept track of the number of laps that students achieved.
During the 2009/2010 school year, Mr. Pletcher wrote multiple grants that enabled Riverside Elementary to have an exercise/walking trail built in their outdoor wildlife learning site (OWLS). He has spent many hours since improving and maintaining this trail. He organizes the staff, PTO and students in quarterly workdays on Saturday mornings to help maintain and improve the trail, outdoor classroom and planting, pruning and identifying plants and trees in the area. This is above and beyond his teaching assignment.
In the 2011-12 school year, Stephen became involved in the National Archery in the Schools Program, (NASP). After securing the funding and working with trainers, he coordinated efforts with the district maintenance crew to install a retractable net in the gymnasium. As a result of his efforts, students have the opportunity to develop their archery skills. This is the only elementary school in  that provides this curriculum.
Mr. Pletcher also coordinates an extra activity with  students in an annual jump rope challenge. This year, Steve will challenge his students to raise funds for the Salvation Army with this contest. As you can tell, Steve displays a great deal of energy and enthusiasm for his job. To his students he combines high expectations for learning and behavior with a sense of fun thrown in. In short, Steve connects with his students.
Perhaps Steve’s greatest strength is integrating reading and math in his Physical Education activities.  He is always listening to what students are learning during PLC time at each grade level. He will try to find a way to help teach that math or reading concept to his students during a Physical Education activity.
Westar Energy, Inc of  sponsored the Conservation Educator of the Year award.
In conclusion, Mr. Pletcher is the type of teacher everyone would want for their child. This recognition of Stephen Pletcher as the 2012 Conservation Educator of the Year by the Kansas Wildlife Federation is well deserved.

Posted On April 21, 2016
Tuttle Creek State Park invites families to attend the Little Apple Pedal, on Sunday May 1, from 2 p.m.-4 p.m. at the River Pond…

Posted On March 13, 2016
Most of us have had a mentor at some point in our lives who inspired us, taught us, and delighted in our successes. It’s…

Posted On August 7, 2014
Snowy Owl: The Snowy Owl (Bubo scandiacus) is an unusual selection to feature because it is not a resident of Kansas and seldom visits. But…