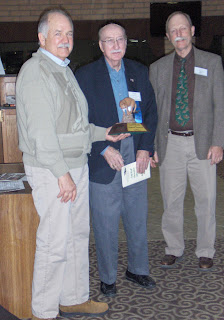 The Kansas Wildlife Federation (KWF) proudly announces winners of the 2012 Conservation Achievement Program Awards (CAP). KWF honored thirteen recipients on February 23rd at a reception and banquet in their honor in .
For 49 years, the Federation has recognized Kansans who have devoted exceptional efforts for wildlife conservation in the state. Kansans, who wished to recognize the awardees for their contributions, supplied the nominations.
The CAP awards are given in several categories including youth, land, water, wildlife, forest, education, farming and ranching. For 2012, 12 awards were given, along with the President’s special award for meritorious service to the KWF.
These are the most prestigious conservation-related awards given in  and are patterned after similar awards in most other states through respective state affiliates of the National Wildlife Federation. Long-time professor of biology at  , Robert Robel of  won the overall award, Conservationist of the Year. Dr. Robel passed away last month so his wife, Anise, accepted the award in his place.
Award sponsors for these awards included Westar, Inc., Kansas State Chapters of the National Wild Turkey Federation, Kansas Chapter of the Wildlife Society, Kansas Chapter of the American Fisheries Society, Geary County Fish and Game Association, the Watershed Institute, the Jim Ruder family of WaKeeney, Kansas Farmers Union and the Emporia Area Chapter of the Quail and Upland Wildlife Federation.
The 2012 Conservation Communicator Award was presented to Thayne Smith of . Thayne was born in  and went to school there until he was six. Because of the Dust Bowl, his father lost his job on the railroad and the family moved to  for six years. The family moved back to the Dighton area, where Thayne finished high school. Much of his love for the outdoors was established in western .
Thayne attended  majoring in journalism. His first job out of college was in advertizing for Acton Co., which made coolers in . This started Thayne on his road to the outdoors. His next three jobs all involved newspapers, at the Newton Kansan, the Garden City Telegram and the Salina Journal as a newspaper writer-editor-photographer.
For five years Thayne served as the Public Relations Director with the Kansas Highway Commission (now the Kansas Department of Transportation). He followed that with three years of free-lance writing and editing  outdoor magazines.
In 1966 George Moore, Director of the Kansas Forestry, Fish and Game Commission, convinced Thayne to go to Pratt to serve as his Chief of the Information and Education Section. During his 5-years there, Thayne was the first recipient of the Kansas Wildlife Federations’ Conservation Communicator’s Award in 1967.
Thayne went to work for the Coleman Company in  as a Public Relations Director for five years before moving to to serve in a similar position for the Recreation Vehicle Industry Association (RVIA). A move to  found him being a PR man for Zebco Co. and then Lowrance Electronics. He has been editing magazines, free-lance writing and outdoor photography since 1989.
During all this time Thayne was very active in professional writer’s organizations, regardless of where he lived. He served in various positions, including president, with the Outdoor Writers of Kansas (OWK). Thayne is the only surviving charter member of OWK, having met at  to form the organization in 1962. He still attends as many of the OWK meetings as possible, as recently as last November in Russell.
Thayne has served as president of the Outdoor Writers Association of America (OWAA), the Association of Great Lakes Outdoor Writers (AGLOW) and the Great Rivers Outdoor Writers (GROW), a four-state association of , , and . He is an Honorary Life Member of the Missouri Outdoor Communicators (MOC) and the Texas Outdoor Writers Association (TOWA).
Since 1950 Thayne has been an award-winning freelance writer-photographer and outdoor magazine editor. He has had more than 1,000 articles published in national magazines. Many of us remember reading Thayne’s articles in past years. His contribution to  outdoors, firearm education and wildlife appreciation deserves recognition.
It was an honor for the Kansas Wildlife Federation to recognize Thayne Smith as the Conservation Communicator of the Year for 2012.

Posted On November 29, 2012
The Sportsmen's Act of 2012 may yet again come up for vote in the U.S. Senate as members are working hard to craft a solution…

Posted On August 13, 2014
By Susan Stephenson Interfaith Power & Light   From Pittsburgh, PA to Denver, CO people of faith across the country are speaking out in support of the EPA carbon…

Posted On March 4, 2013
Bill Edwards, left, from Olsburg, receives the 2012 Organization of the Year award from Troy Schroeder, Kansas Wildlife Federation President. Bill is the Vice-Chairman of…