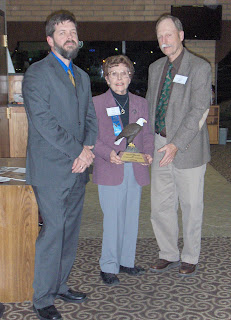 The Kansas Wildlife Federation (KWF) proudly announces winners of the 2012 Conservation Achievement Program Awards (CAP). KWF honored thirteen recipients on February 23rd at a reception and banquet in their honor in .
For 49 years, the Federation has recognized Kansans who have devoted exceptional efforts for wildlife conservation in the state. Kansans, who wished to recognize the awardees for their contributions, supplied the nominations.
The CAP awards are given in several categories including youth, land, water, wildlife, forest, education, farming and ranching. For 2012, 12 awards were given, along with the President’s special award for meritorious service to the KWF.
These are the most prestigious conservation-related awards given in  and are patterned after similar awards in most other states through respective state affiliates of the National Wildlife Federation. Long-time professor of biology at   , Robert Robel of  won the overall award, Conservationist of the Year. Dr. Robel passed away last month so his wife, Anise, accepted the award in his place.
Award sponsors for these awards included Westar, Inc., Kansas State Chapters of the National Wild Turkey Federation, Kansas Chapter of the Wildlife Society, Kansas Chapter of the American Fisheries Society, Geary County Fish and Game Association, the Watershed Institute, the Jim Ruder family of WaKeeney, Kansas Farmers Union and the Emporia Area Chapter of the Quail and Upland Wildlife Federation.
The 2012 Conservationist of the Year Award was presented to Robert J. Robel of .          Robert was born in . He was accepted into medical school at  when he was a senior in high school. He switched from pre-medicine to wildlife ecology in his junior year because he didn’t want to be confined to an office if he became a doctor. While still an undergraduate he sought out advisors and had funding lined up at the  of  and  for his master’s and doctoral degrees, respectively.
In 1961, he was hired as an assistant professor in ‘s department of zoology, before the merger that created the Division of Biology. On a Fulbright Scholarship, he traveled to the  in 1967 to study the Black Grouse. While in the  he was asked to help with a long-term study of the, a close cousin to the North American Elk. He developed a management plan to help increase numbers by culling female deer that were not capable of producing healthy offspring.
An extensive amount of Dr. Robel’s research in  has been devoted to upland game bird species, including Prairie-chickens and Northern Bobwhites. The research led to enhanced understanding of their behavior and habitat needs and provided management frameworks designed to maintain sustainable populations. In an effort to strengthen such research in , he helped establish the Kansas Cooperative Fish and Wildlife Research Unit on KSU’s campus.
As well as wildlife research, Dr. Robel was involved with the National Institute of Health regarding the effects of herbicide exposure and cancer. Dr. Robel served as a consultant and science advisor for several governors, energy companies and numerous committees and task forces. For the last several years, he was on a federal advisory committee for the Department of the Interior concerning wind power and wind farms.
Dr. Robel was a member of several professional societies and wildlife conservation organizations, including being a Life Member of The Wildlife Society, an Honorary Life Member of the Kansas Wildlife Federation, an Elective Member of the American Ornithologists Union, and a Fellow of the American Association for the Advancement of Science.
He was also very active with the Kansas State Rifle Association and created a tax-exempt foundation to raise funds to promote legal shooting activities among youth and women in . In addition, he was active with the National Rifle Association and served on the Board of Directors for 25 years. He was charged with the task of fundraising for the  Olympic shooting team building at the Olympic Village in . He was a member of the United States Olympic Committee.
Dr. Robel’s career achievements have been remarkable and more, importantly, a positive factor for the quality of human and wildlife in the State of  and beyond.  In recognition of his extensive accomplishments and contributions, the Kansas Wildlife Federation is proud to award the Conservationist of the Year for 2012 to Robert Robel.

Posted On April 15, 2015
By Ted Beringer         The founding of Earth Day is attributed to Wisconsin Senator Gaylord Nelson.  In 1963 he convinced President John…

Posted On October 4, 2013
Firearm deer hunters will have an additional opportunity to take antlerless whitetails during this special two-day season As part of a legislative mandate last year…